The first-ever Lucas Oil Off Road race south of the border might very well have collected the most vehicular carnage of any short-course race to date. And it was, without question, one of the most exciting, action-packed, race weekends this season. Parts, panels, and miscellaneous pieces were scattered around the track multiple times as race trucks went flying and flipping over whoops and loose bermed corners. Some trucks were destroyed, and almost all suffered some sort of damage and browning rust coverage on the chassis thanks to the ocean air in Estero Beach. Needless to say, there are a couple complaints being voiced right now in the short-course racing community. But with a brand new track in a brand new location, there are bound to be things that go wrong. And we know the LOORRS officials were making some serious efforts modifying the track this time and lots of notes to make it an even better race venue next year.

But as far as entertainment goes, race fans could not have asked for more action! The excitement of the crowd was off the hook. As soon as a race would start, the entire crowd would go to their feet and stay there until the checkered flag was waved. But while Saturday brought in big crowds, Sunday’s Round 12 race absolutely packed the grandstands with race fans squeezing into every spot they could fit to watch the action at the Estero Beach Raceway just a few miles south of downtown Ensenada in Baja.

Round 11 saw most of the carnage. It was the first race day and a couple vehicles never even made it to their races after practice and qualifying. That, combined with the time it was taking to fix the track between sessions led LOORRS officials to cut the races to 10 laps for Rounds 11 & 12. They even pushed the Pro 4 trucks to the end so that their size and power did not chew up the track for the other classes. The Estero Beach track is brand new and not yet packed down. That means that corners, straightaways…everywhere on the track was loose, making for some enormous rooster tails that would cover tailing race trucks and temporarily eliminate forward visibility. Some bad wrecks occurred—mostly over the whoops section right into the hairpin corner, evidenced by the number of trucks that ended up incapacitated in the beginning of that corner. A number of trucks took a tumble—not only barrel rolls but also end-over-end. The Pro Lites seem to suffer the wrath of the course the worst, but no trucks were really spared on a track that quite possibly gave drivers with desert racing experience an advantage (since they’re not always on perfectly groomed tracks).

After a fairly rough first day, the LOORRS officials and crew worked hard to soften bad spots on the track, filling low spots, smoothing out whoops, and dumping as much water onto the track as they could while trying to pack it down. The work paid off, as the amount of damage dropped dramatically for Sunday’s Round 12. Without the carnage and cautions happening as often, fans were in for some great competition as drivers swapped positions back and forth multiple times, vying for podium position. General Tire team driver Robby Woods in the #99 Carlyle racing truck fought for position in Sunday’s Pro 2 pack, managing to get by one truck after another until he eventually placed 3rd in Round 12 of LOORRS racing. 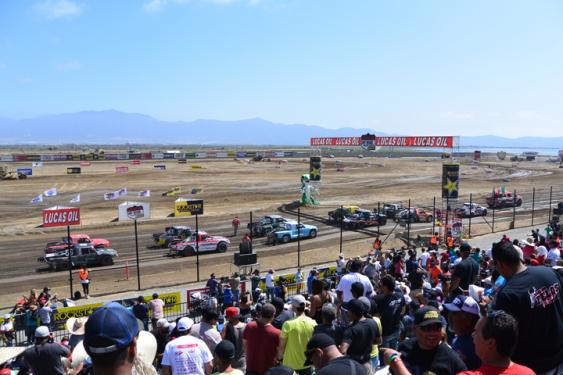 Fans were packing in early on for the first race of the weekend. The stands were looking filled before qualifying even began! When it was finally time for racing, the entire crowd was at their feet for the rest of the day. 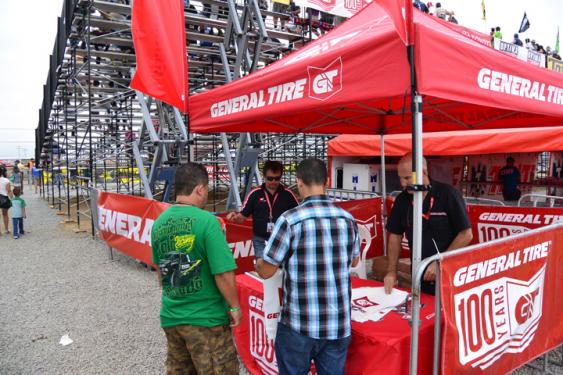 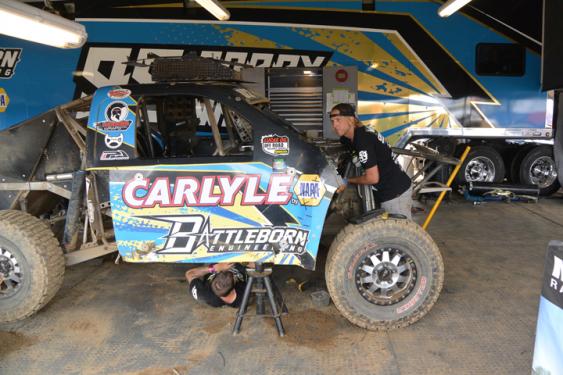 Robby Woods gets ready for Round 11 racing on Saturday, making sure that everything on his truck is ready to go for the weekend. 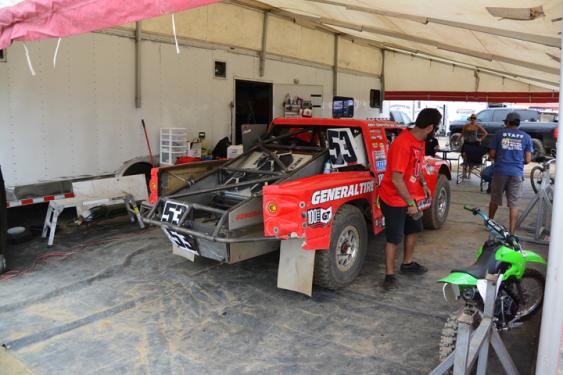 We talked to Ray Griffith before the race, and as always, he was in great spirits and ready for the weekend’s action. His truck was ready to go looking sharp (don’t mind that chipped corner of the bedside—those rarely stay on trucks for a full race anyway). 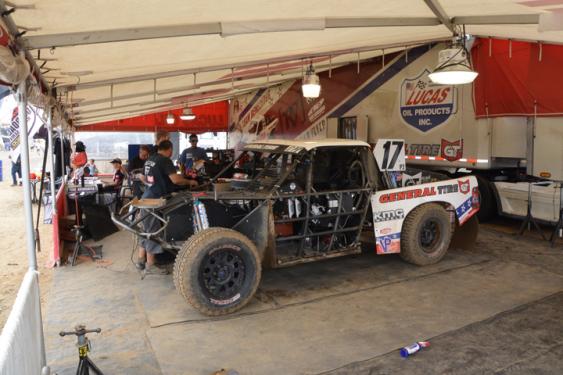 Race prep consists often consists of cleaning up the truck after practice or qualifying to make sure everything is still good to go, and that everything looks clean for the race. 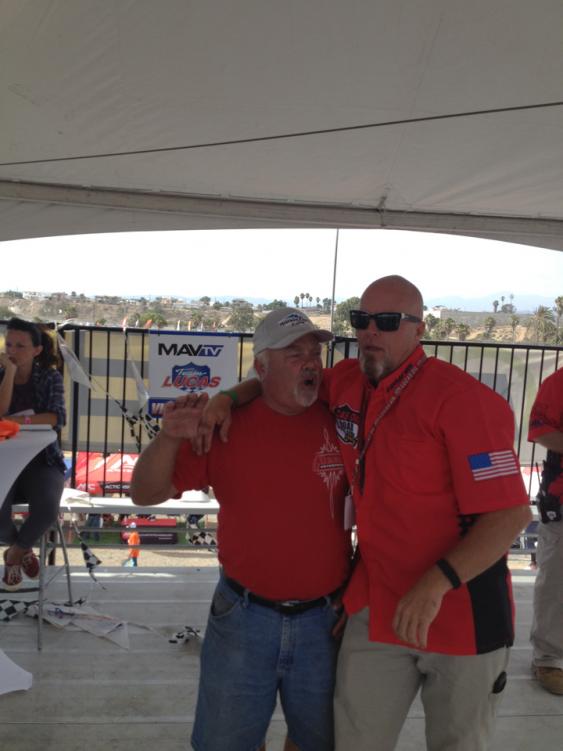 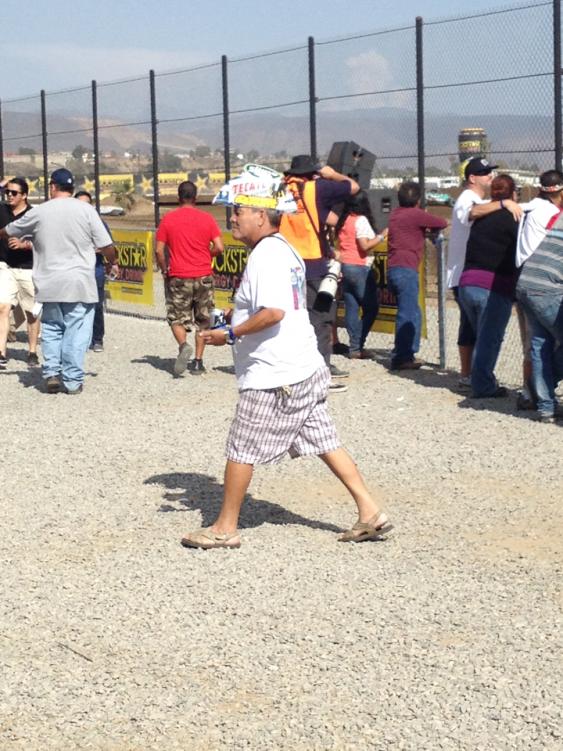 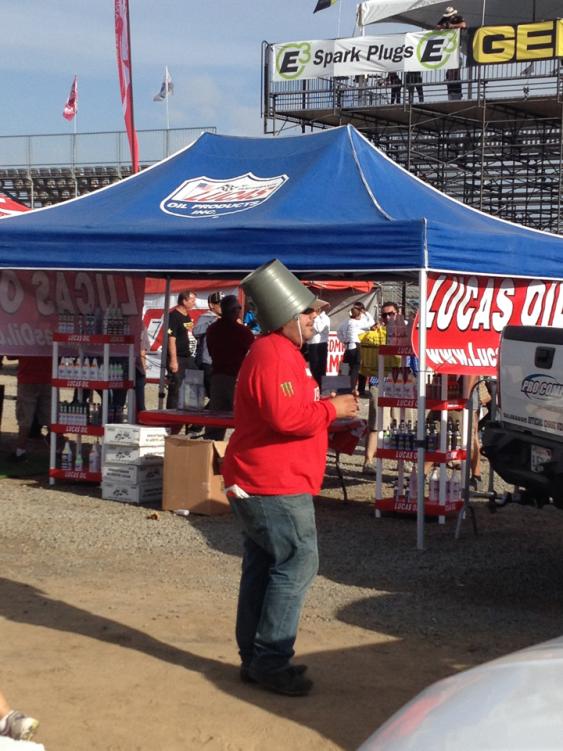 …And we thought the beer box hat was funny. But a bucket works, too. 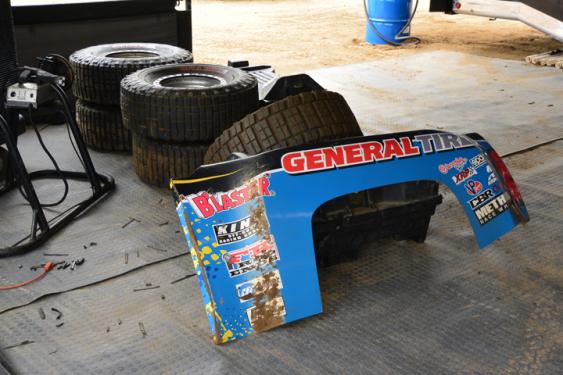 Fiberglass always looks so good prior to the race. 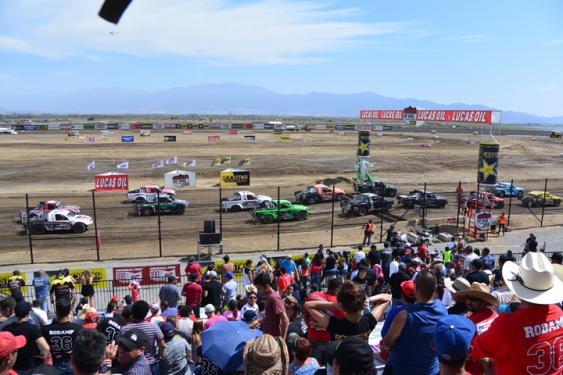 The Pro Lites would see the most carnage of the weekend. Round 11 picked a lot of them off as they tumbled, rolled, and crashed on the new course. 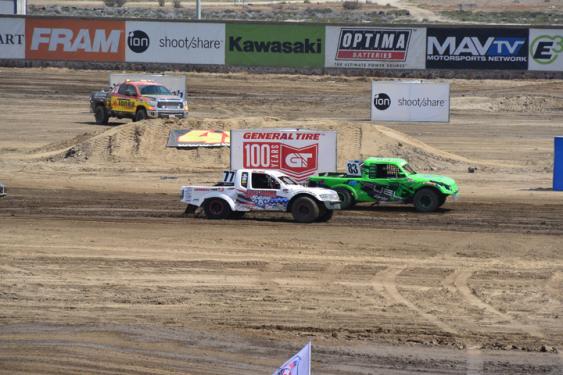 Jerett Brooks would hold onto 2nd place for much of the race but eventually get knocked out of position before the race’s end in a loose turn. He actually ended up finishing the race with a flat tire after making contact on the course. 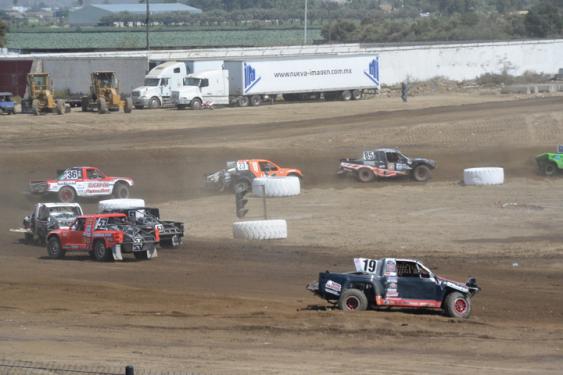 More than one truck was left tattered and pointing the wrong way on the track on Saturday. 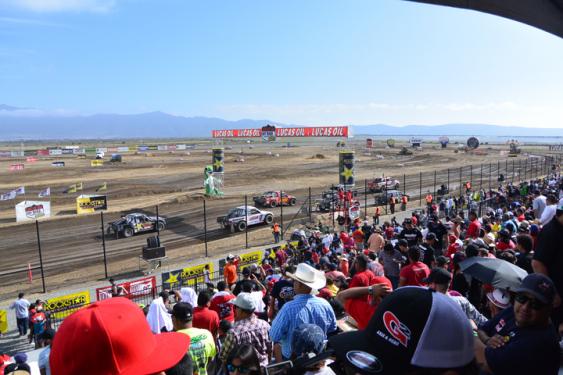 The Pro 4 race was pushed until the end of the day so they wouldn’t chew up the track for the rest of the racers. All races were taken down to 10 laps after Saturday’s qualifying so they could keep the course intact. 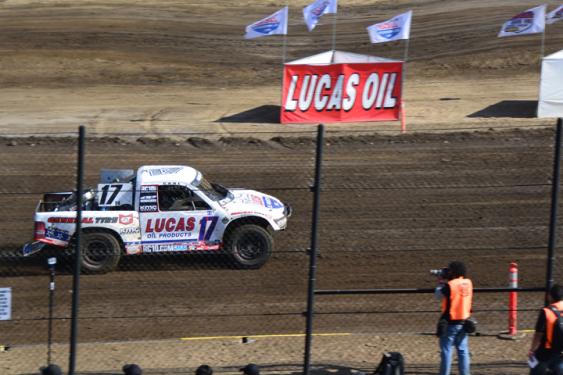 It doesn’t take a lot to peel the fiberglass off the trucks as they constantly contact each other. Carl Renezeder’s truck was looking clean at the start of Saturday’s Pro 4 race…. 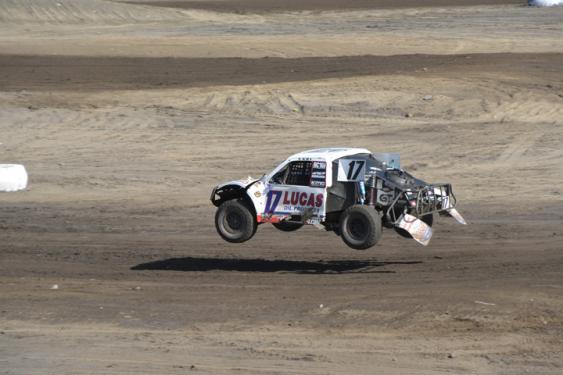 ….And seconds later the bedsides were gone. 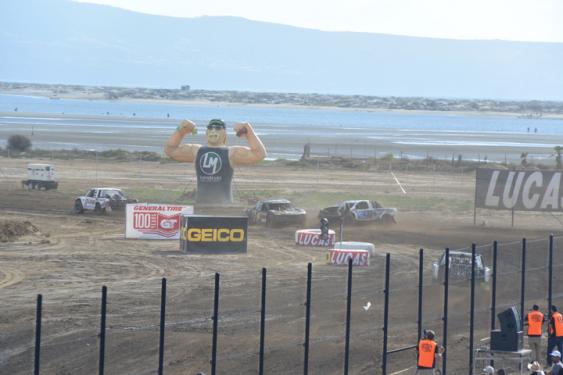 Early on in the Pro 4 race, the #38 Rockstar truck got sideways in turn 1 and Doug Fortin’s #96 truck T-boned it, smashing the front end up of Fortin’s truck. Amazingly the Rockstar truck was able to pull away and continue on. But it looked like Fortin was out for sure. 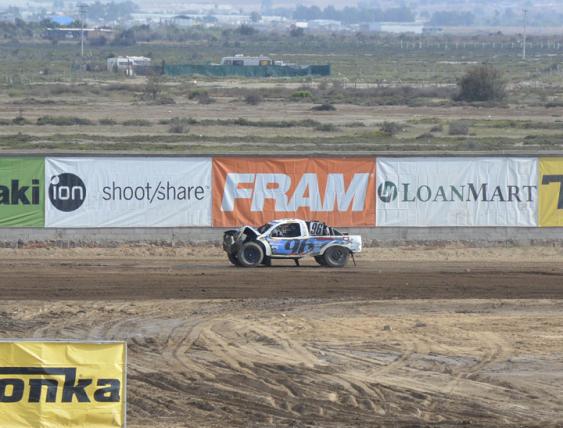 Fortin got his truck started and we saw him limp it off the track, the front end all smashed. 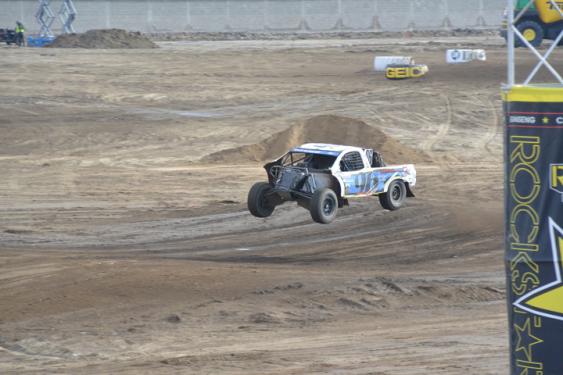 Seconds later, the #96 truck pulled back onto the track and dropped the hammer! He ripped past competition and fought his way up to 4th place by the end of the race. It was an awesome finish—and without a front clip! 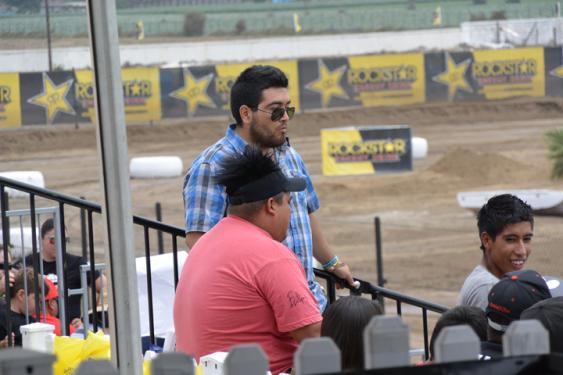 It was hair-raising action all day on Saturday for Round 11. 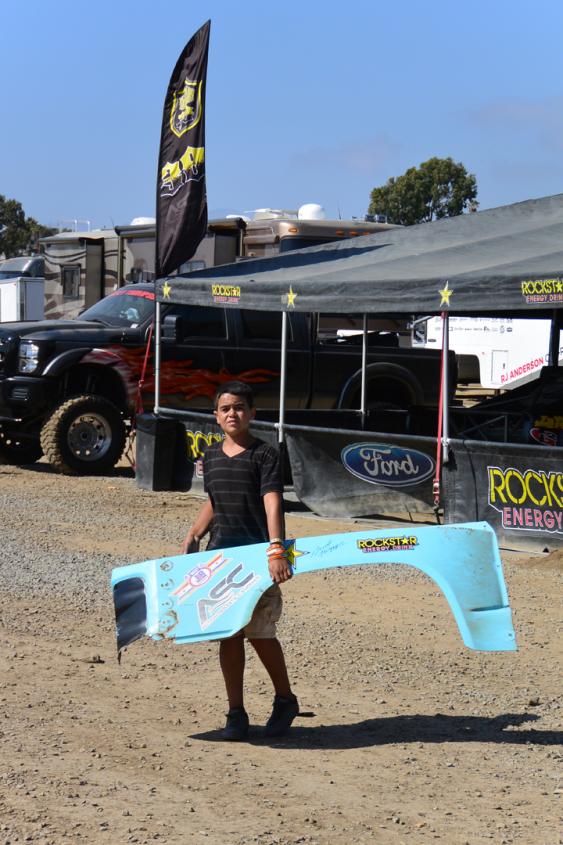 Like we mentioned earlier; There were lots of fiberglass trophies left over after each race. This kid got a whole bedside! 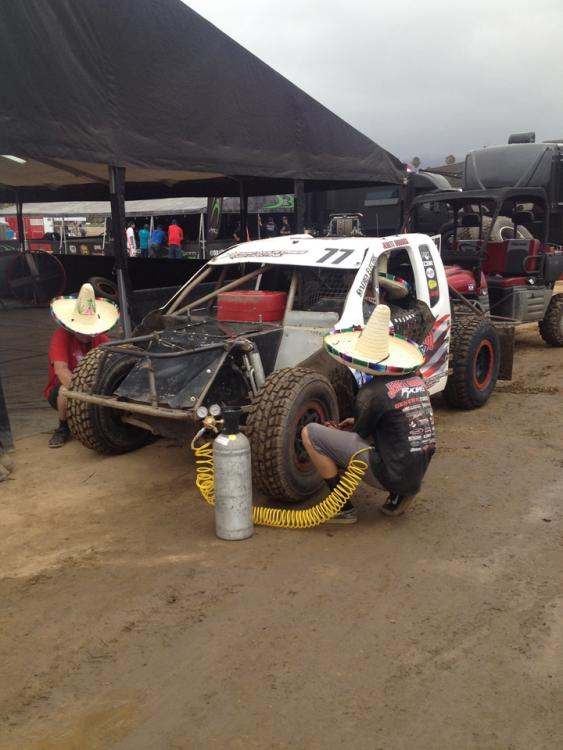 Jerret Brooks’ team was really getting into the spirit of Baja and having a great time. After a rough first race on Saturday, they had the truck ready to go again quickly for Sunday’s Round 12. 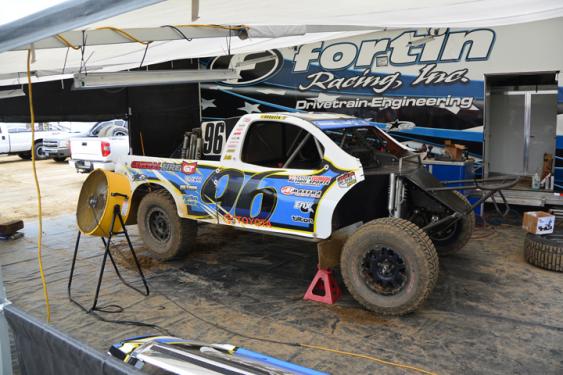 Doug Fortin’s crew worked through the night to not only fab and weld up a new front bumper, but also to replace a motor after the team decided not to take any chances after getting close to a podium finish on Saturday. 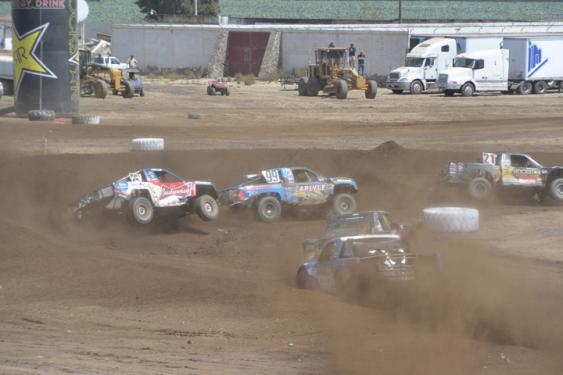 The Pro 2 racing would kick off the day on Sunday, and it was clear that the track was in better condition for racing, and that the drivers were more familiar with it. 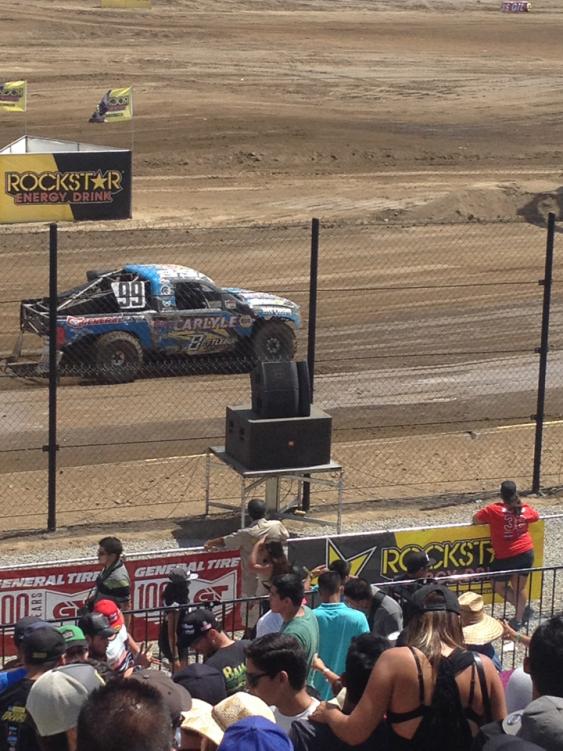 Robby Woods in the #99 Carlyle truck 2 fought hard to work his way up to a 3rd place finish in Pro 2. 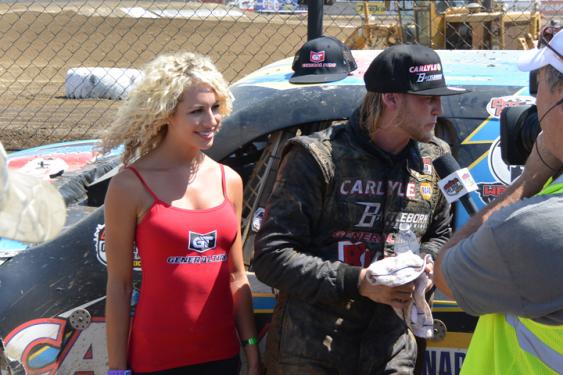 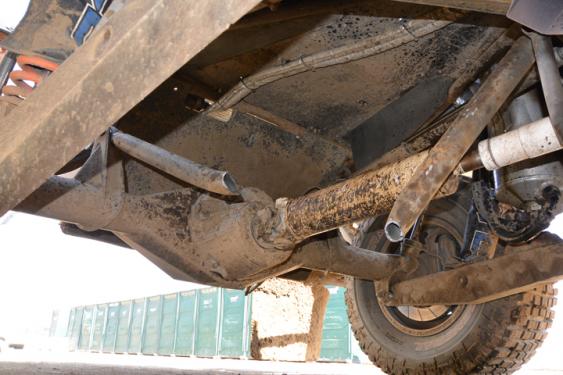 Robby Woods finished the last lap of the race with a broken upper link in the rear of his truck’s suspension, allowing his rear end to walk around as he raced. And he still managed to earn a 3rd place finish! 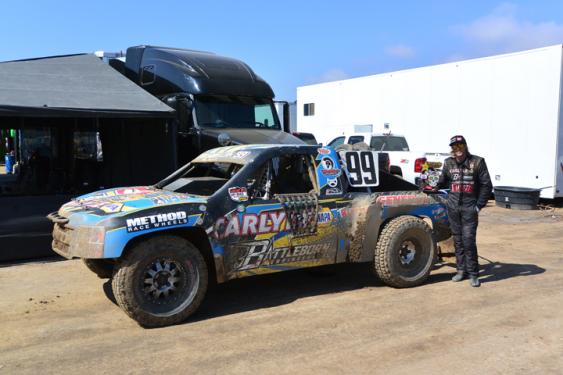 Bright Side of a Partially Rained-out Racing Weekend