Skip to main content
Our World / What's happening / A Competitive Class That You Can Afford to Race in: Jeepspeed

At the turn of the century, Clive Skilton had watched off-road racing remain a rich guy’s hobby for long enough. Where was the entry-level race class that would allow the rest of us to go fast in organized competition? With a goal and a plan, Skilton went out to find sponsors to assist in creating a race circuit based on affordable Jeeps that a team of average guys could race.

With help from enthusiast companies like GENERAL TIRE and KMC, Clive and his son, Darren Skilton, partnered with the Barnett brothers of T and J Performance to maintain a successful race program for the last 15 years that has become a welcomed staple to the Best In The Desert series. A “stock” class requires the minimum safety equipment and limits the modifications to the Jeep platforms, while the modified class allows racers to go faster in more capable vehicles. More recently, a third class has been added that is only limited by track width and front wheel travel, as long as the vehicle is based on a listed Chrysler vehicle. With three levels of Jeepspeed racing, a novice can start in Jeepspeed 1700 car and remain in Jeepspeed for years, changing classes and cars as the team’s skills evolve.

GENERAL TIRE is pleased to have supported the Jeepspeed series for many years—a race circuit that relates to so well to off-road enthusiasts and encourages friends who’ve never been racing before to create teams that go on to stand on the podium next to other off-road racers of all kinds. In fact, our contingency program offers $1,000 for 1st place, $500 for 2nd, and $300 for 3rd place at every Jeepspeed race. Perhaps Jeepspeed is your entry into racing? Watch and see. 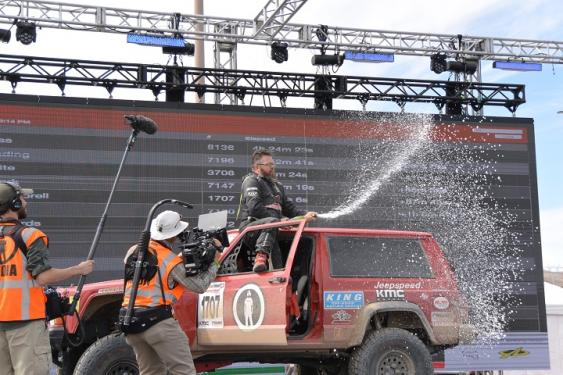 Bassmaster Elite Anglers Switch Focus to Angler of the Year