There was no shortage of action in Las Vegas over the weekend as racers traded paint, spun, and rolled in an effort to be at the front of the pack in the General Tire Fight Under the Lights at the Las Vegas Motor Speedway. Our General Tire short-course racers did some incredible racing to bring home a plethora of podium finishes to help kick off our celebration of a century of innovation and production in the auto industry. It was only too perfect that Rounds 15 & 16 of LOORRS racing would happen to land on the month that marks our 100-year anniversary. General Tire dealers and employees flew in from all over the world to watch our teams dominate in Pro 4, Pro 2, and Pro Lite racing for Rounds 13 & 14 of the Lucas Oil Off Road Racing Series on Friday and Saturday nights. We saw some well-deserved wins come from our teams with 1st, 2nd, & 3rd place finishes in Pro 4, a 2nd place in Pro 2, and 1st & 3rd place finishes in Pro Lite racing.

Friday night’s racing kicked off with Pro 4 trucks flying around one of the best tracks in short-course racing. Carl Renezeder would fight back and forth for 1st position the entire race but eventually snatched the win. Doug Fortin in the #96 Toyota was racing fiercely and stayed at the front of the pack looking for a strong finish when his truck rolled and came to rest wrong side up eight laps into the race. Jerry Daugherty in the Live Fast Play Dirty Motorsports truck ran a clean race and passed the checkered flag just a few seconds behind Brian Deegan for a 7th place finish.

Next up was the always crowded Pro Lite race, with more competition on the track than any other class. Jerett Brooks has been having a great year of racing and is less than 20 points out of 1st place in points standing, and 3rd place finish in Round 15 helped add more points to his total. Ray Griffith in the #53 Pro Lite stayed strong the entire race and finished 4th just two seconds behind Brooks. Ryan Beat was one of only two Pro Lite racers to dip into a 53-second lap time over the weekend and was the fastest in Qualifying on Friday night, but an accessory drive belt took him out of the race and 2nd position where he held steady until the last two laps.

The “Relentless” Renezeder hopped back on the track in his Pro 2 truck later Friday night to secure another podium spot with a 2nd place finish, while “Mr. Excitement” Robby Woods wouldn’t let some rough luck keep him down and still finished with the front half of the pack in 6th place.

Night two of the General Tire Fight Under the Lights was fueled with fans in the stands and some scores to settle on the track. While there was less carnage than the previous night, everyone behind a steering wheel seemed more determined to move to the front. After the Star Spangled Banner ended, LOORRS brought us Round 16 and with it one seemingly unstoppable Doug Fortin. After the previous night’s rollover, Fortin and his team were even more driven. You could tell from the get-go that there was no stopping him this night, and Fortin would keep the rubber side down to finish in 2nd place for Pro 4. Carl Renezeder came in right behind Fortin in 3rd place, earning three out of four possible podium spots for his team this race weekend! Daugherty ended up having some issues with his truck and ended up 9th right behind Kyle LeDuc.

With a good podium finish the night before, Jerett Brooks was looking for the top spot in Pro Lite, Round 16. With Brandon Arthur hot on his tail, Brooks led the race and grabbed the gold, putting him even closer to current points leader, RJ Anderson. Ray Griffith would stay strong, but couldn’t quite squeak onto the podium this race, crossing the finish line 5th this night. Ryan Beat would run strong and towards the front just like the night before, but bad luck struck again in the form of a broken rear axle shaft.

Robby Woods would hold around the same position he did the night before, and was 7th to fly past the checkered flag. Carl Renezeder was looking to make four wins from four races for the weekend, but he got tangled up in a fiberglass buster early on that sent so much mud into his helmet that it broke his electric helmet shield wiper, demanding that he rip the contraption off and just use his own hand. Without windshields on these race trucks, an almost unimaginable amount of mud and rocks get kicked up into the drivers’ faces by other trucks, and Renezeder would drive the rest of the race basically blinded with mud, but he still managed to finish the race in 11th place.

With six podium finishes for the weekend, we couldn’t ask for much more. Congratulations to all our racers for the awesome show they put on for the General Tire Fight Under the Lights at the Las Vegas Motor Speedway! 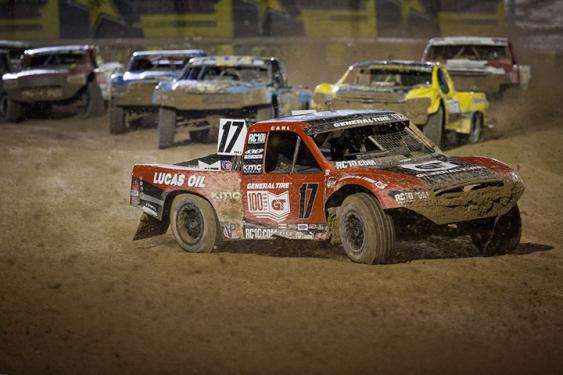 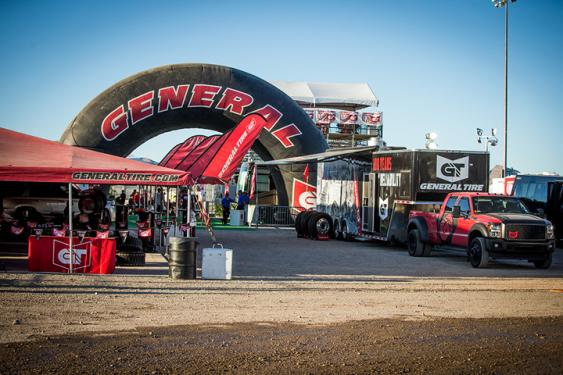 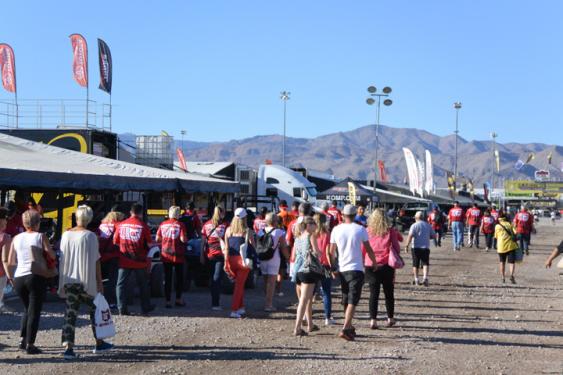 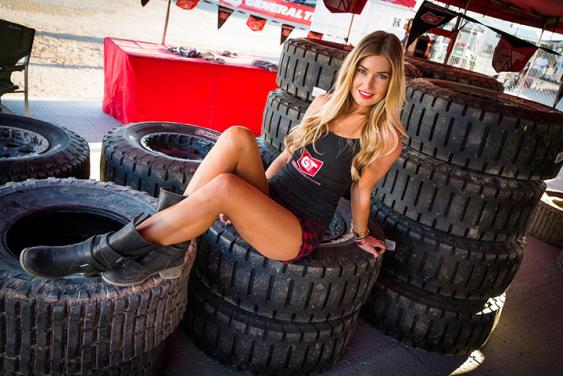 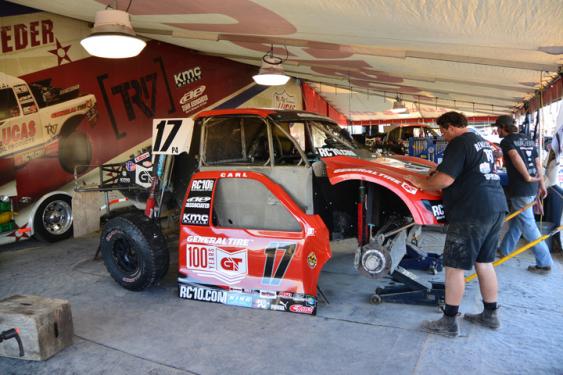 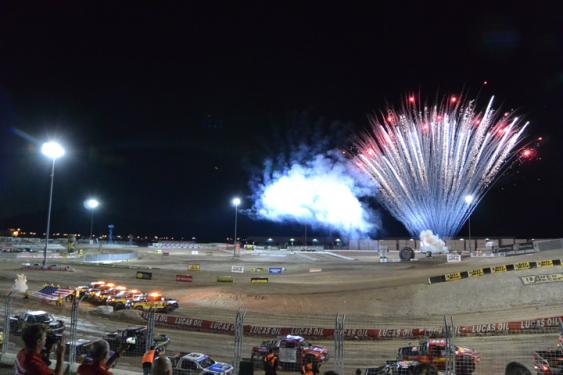 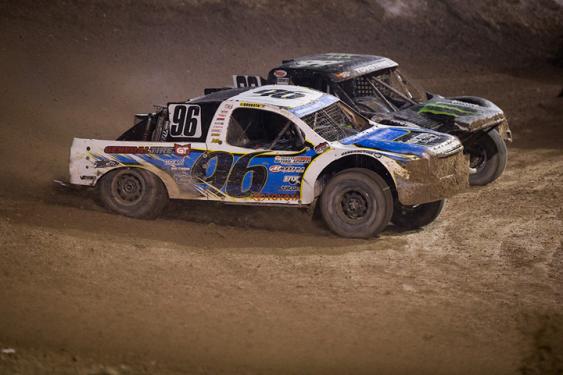 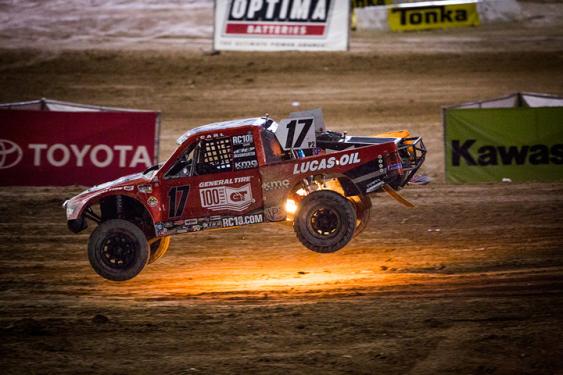 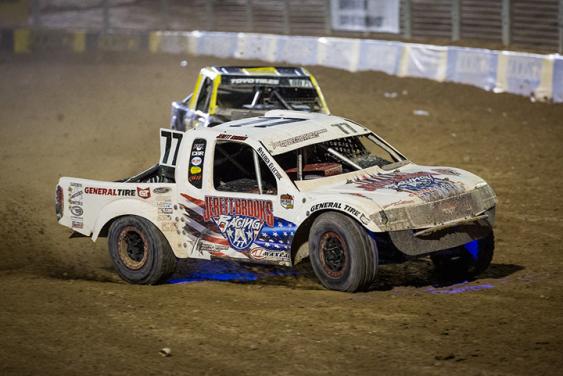 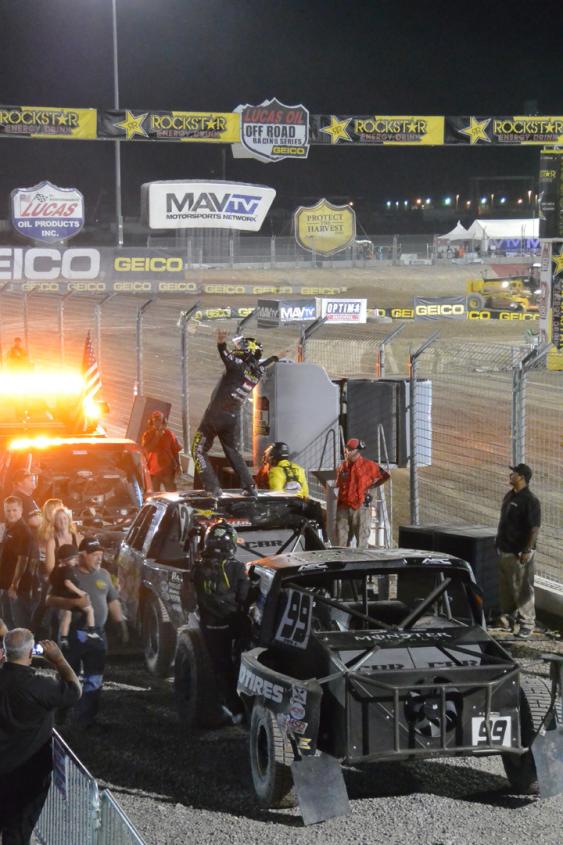 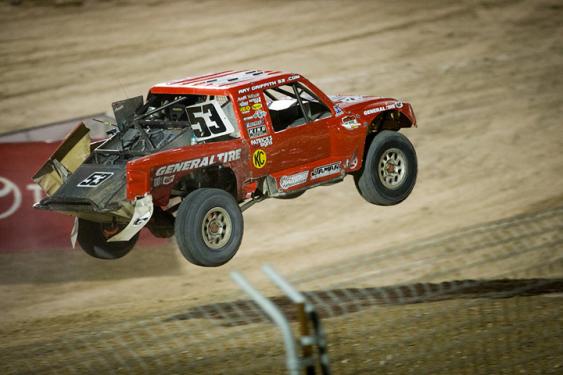 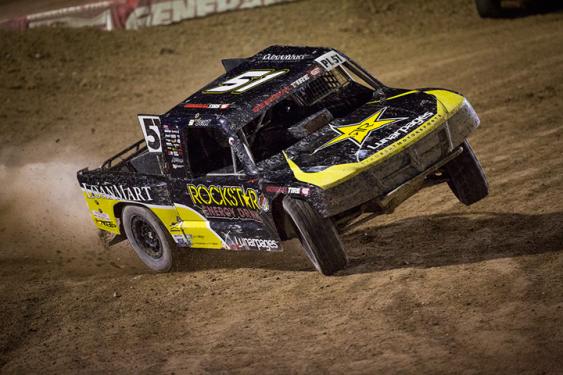 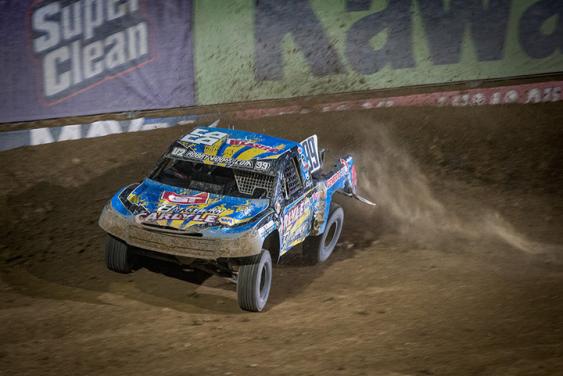 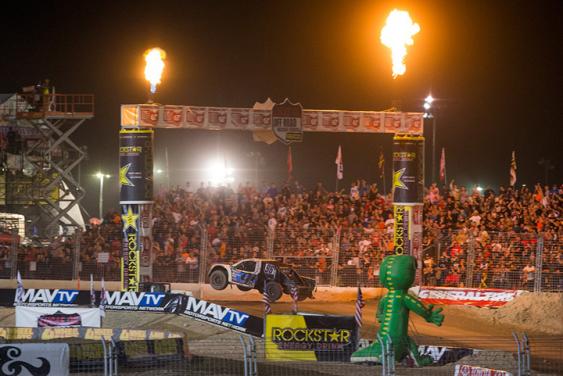