Morning came and the group started to gather, one by one, around a campfire that was holding off the last bit of darkness. You could already smell bacon on the grill of those early early risers, and tents were slowly coming down. We wanted to yell out, “Ten more minutes, Mom!!” but if we didn’t start getting up soon, we’d be late for Day 4 of the Mostly Dirt Every Day tour. Coffee was still being poured when one of John Mears’ ranch neighbor casually drove up in a red Chevy. After about 20 minutes, John came back. “I sold the ranch.”

You could sort-of get the sense that John was good at wheelin’ & dealin’, but this was the first real sign of it. Before the week was out, John would sell three pieces of property, acquire a fullsize stepside Chevy truck, and part with an old flesh-colored Wagoneer.

With John in an already good mood we took off for another day of exploration & adventure over the Sawmill Pass and into Lemhi Valley. It would be our steepest climb and highest elevation reached at 9,570 feet. This climb would spread out the group. Even with most of the bugs worked out of most people’s vehicles, cooling issues are hard to shake—especially on slow-going climbs. Hoods were up on Jeeps, Fords, and even a Land Rover that were spread along the ascent. We finally regrouped at the top and had a break to take in the view and to let our rides cool down for a bit. From there it was follow-the-leader along a narrow, rocky trail until we got into the Lemhi Valley and headed for the old mining town of Gilmore, Idaho. Here in Gilmore, John would auction off two more pieces of property that day, giving the proceeds to charity. He still has one more plot in Gilmore, if you’re interested, or you can buy a different one starting at $2,995, according to the sign on the side of the road as you drive into town. There are some still refusing to let Gilmore turn into a ghost town.

Seeing how far out the few remaining residents of Gilmore lived was enough to make our past few days’ wilderness experiences seem not all that impressive, and like we were going back home to giant overfilled hamster balls when we returned to city life.

With an appreciation for modern-day utility services, we left Gilmore and headed toward Tendoy, Idaho, for the night. After stopping at what we think was the only store in town, we headed up a dirt road to find a camping spot on Agency Creek. The temperature was dropping fast, and while it was still light out, you could tell that most of us would be sleeping in sweatshirts that night. Upon this fourth night of our trip, we’d already adopted our own common rituals and everyone was set up and around the campfire by the time nightfall came. It’s amazing how a good trip can exhaust you more than work! 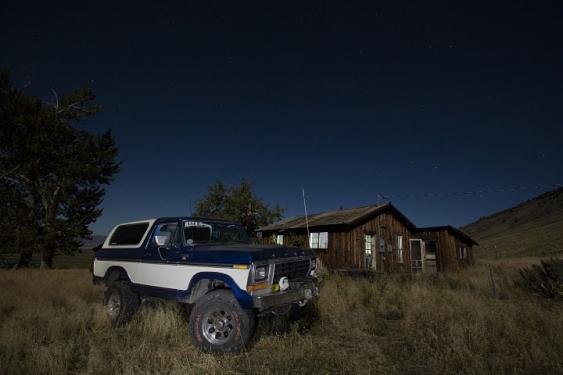 If stars are still out, that should be too early to wake up. 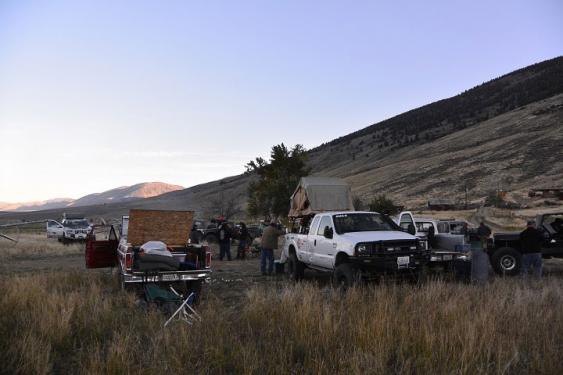 Light broke, and the group started breaking down tents and packing up gear for another day of long dirt roads. 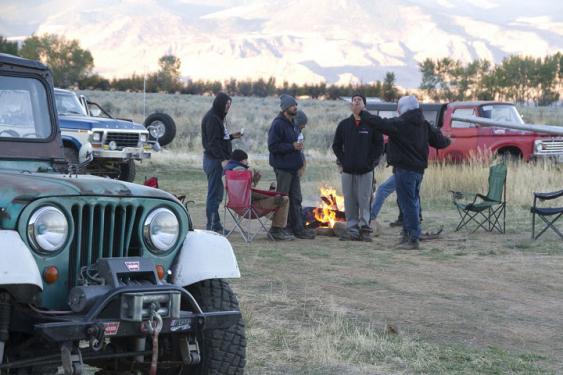 It was the end of September, and mornings were already a little frosty. A nice campfire was a great thing to wake up to. 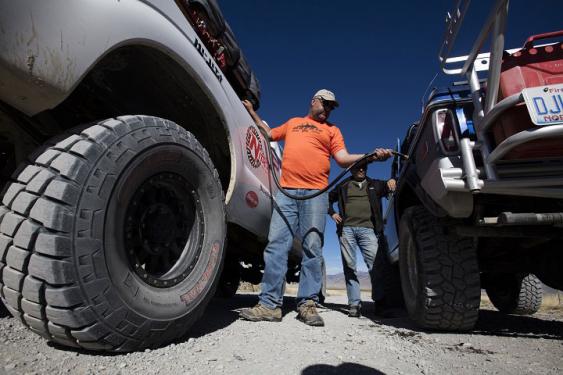 We hadn’t gotten to a fueling station before camping for the night, so John Mears filled up those vehicles that were starting to run a bit low. He has a transfer tank built into the back of his Super Duty support truck. Maybe it was a good thing John brought this one instead of his old GMC…. 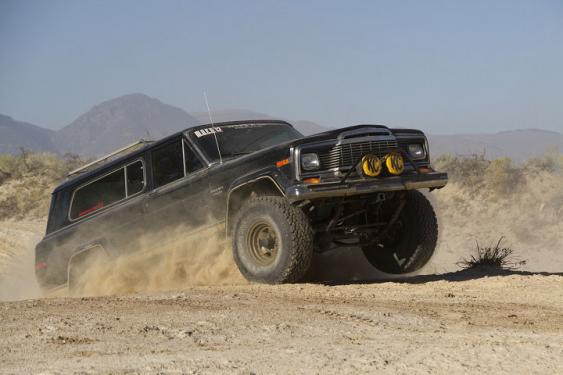 We left John’s ranch and headed for some local small but fun sand dunes in the Pahsimeroi Valley. Jerrod Jones’ 1979 Cherokee Chief saw its first bit of air for the week. 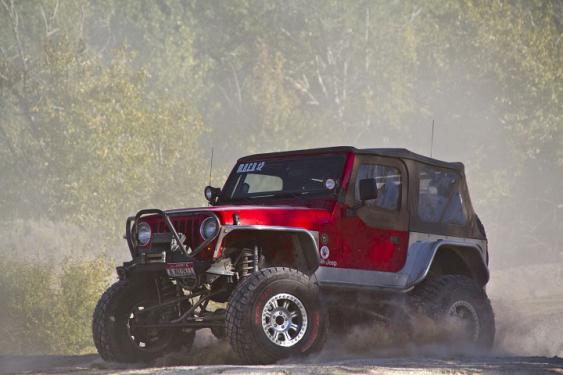 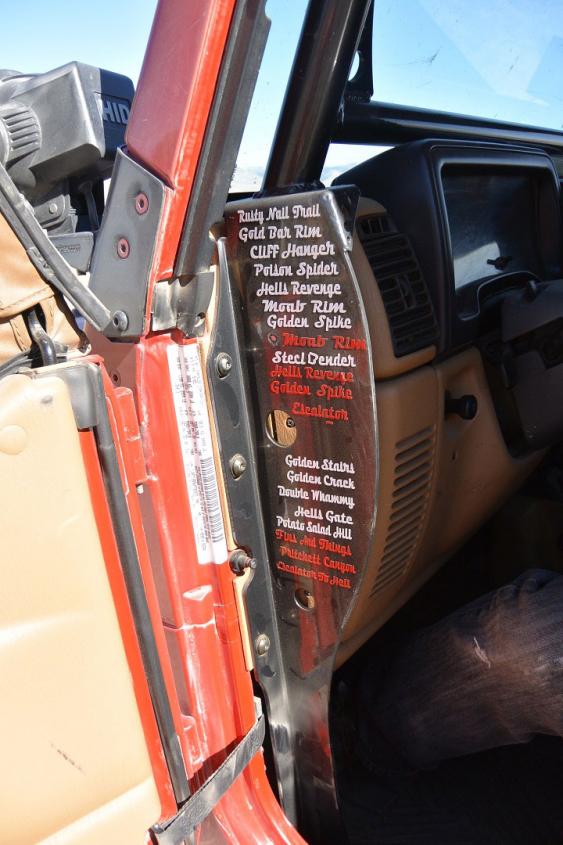 Inside Adrian Dorame’s TJ, on the side of the Rockhard rollcage, he’s listed all the trails he’s accomplished in this vehicle. Pretty cool way to keep track! 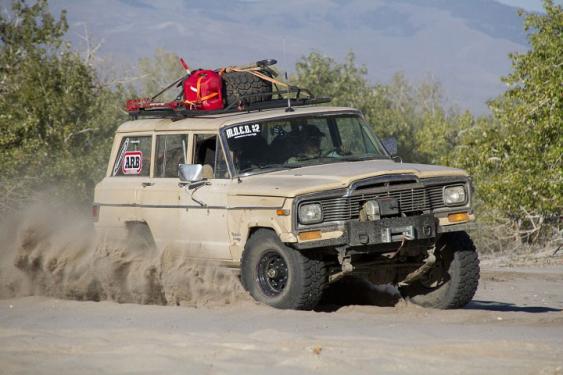 For no other reason than the color (let’s make that clear, now), this ’81 Wagoneer became affectionately known as the “Flesh Rocket.” In fact, DelRay Romero and Cliff Olney even found lettering at a local auto parts store that spelled out the “F.R.” moniker on the back of the cargo gate.

The inline six-cylinder engine under the Wagoneer’s hood actually proved to be pretty peppy, and consequently it also liked to overheat just like its AMC V-8 brethren. 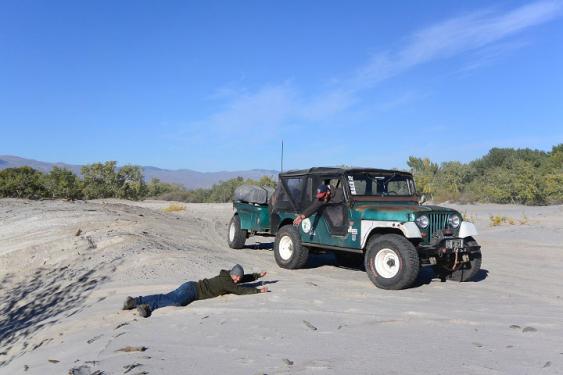 By Day 4 a few guys were starting to get a little tired, but we think Rocky Dorame might’ve been exaggerating…just a little. 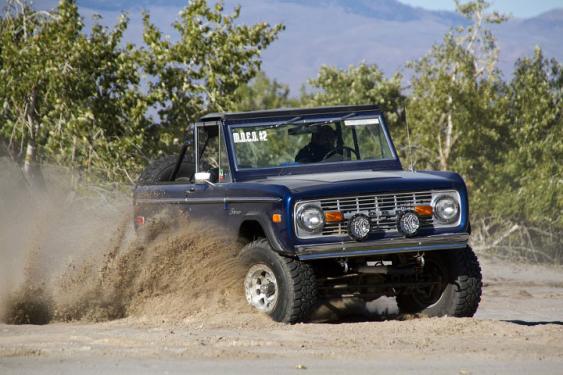 Tony Talbert’s Bronco was one of two representing vehicles from General Tire on the trip. This was really the first big trip Tony had been able to take his Bronco on, but we think he’s hooked now. He loves his Bronco and we’re pretty sure we can convince him to spend some more time in it. 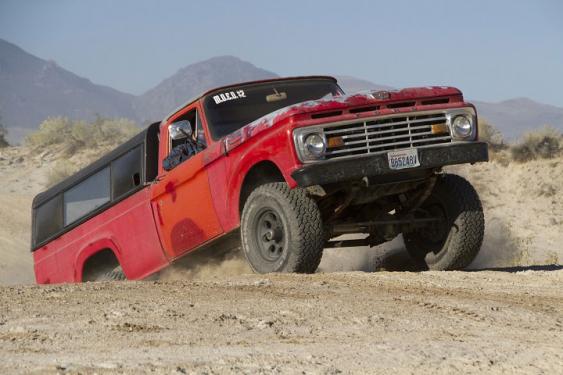 You don’t often see an old F-100 with a camper shell on the back pushing its luck through the sand. That didn’t seem to stop Kurt Meachum, though. 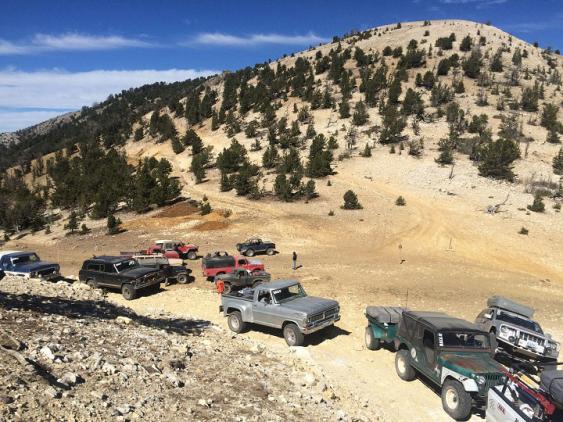 At the top of the Sawmill Pass. 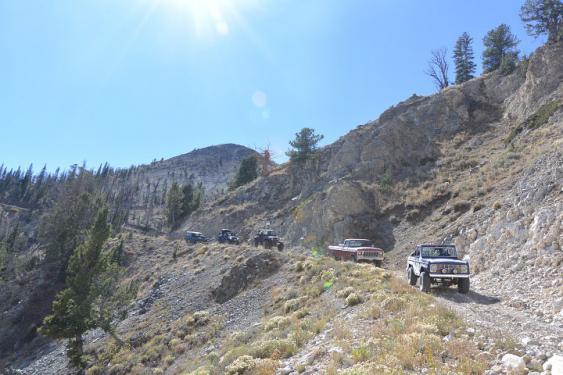 We dropped from the top of the Sawmill Pass down into the Lemhi Valley via a narrow trail that demanded full attention from the drivers. 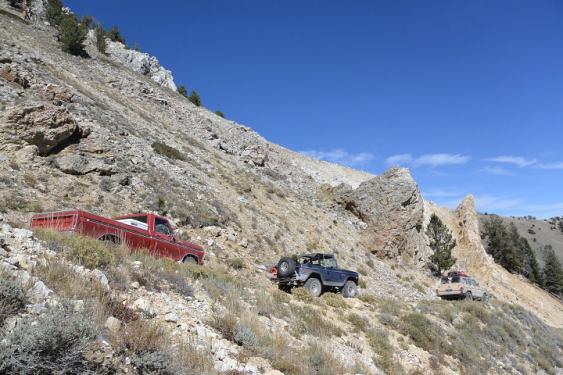 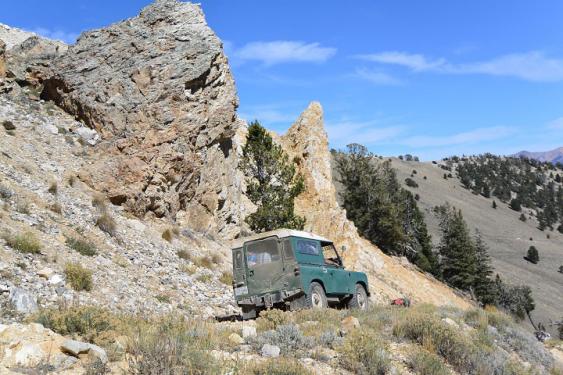 Tony Ross and Robert Ross were still plugging away in their old Series 2A. We still had all 16 vehicles with us, but if we did lose one, we knew it wouldn’t be these Canadians who decided to drive this thing all the way down from Vancouver. 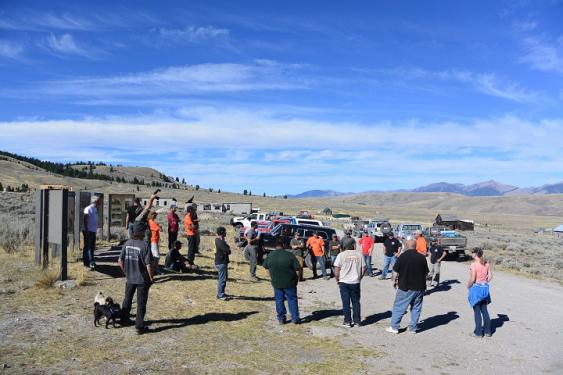 We arrived in the old mining town of Gilmore, Idaho. In the early 1900s, people thought the small mining camp might actually have potential to be a bustling town, but when the mines shut down in the early 1930s, so did the town. 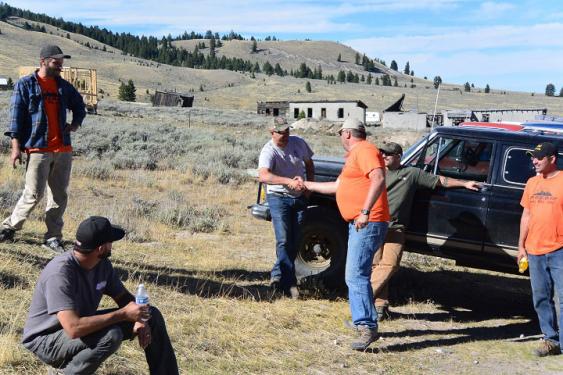 John Mears would end up selling two of three parcels he somehow owned in Gilmore, and he donated the money to charity, if that tells you what kind of guy John is. 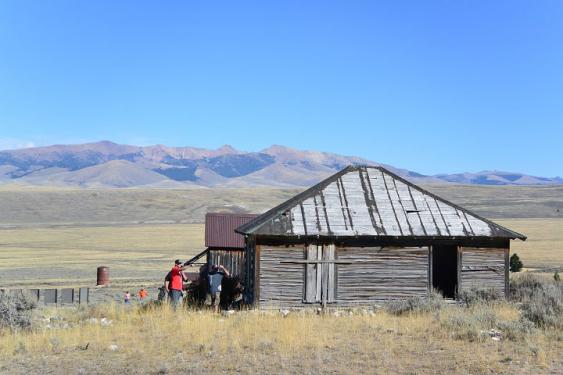 There are still a few remaining residents who refuse to give up and let this become an official ghost town. 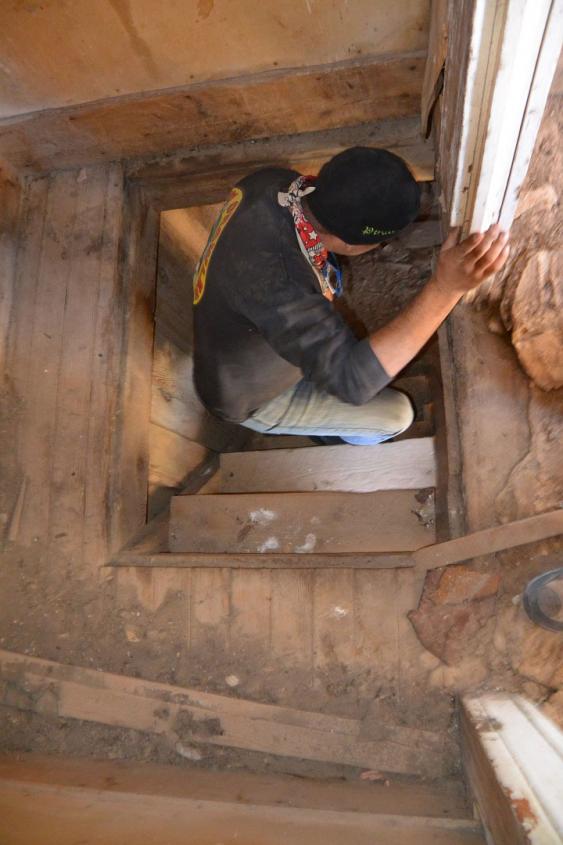 Of course, we had to do a little exploring inside the abandoned houses that we probably should’ve stayed out of. 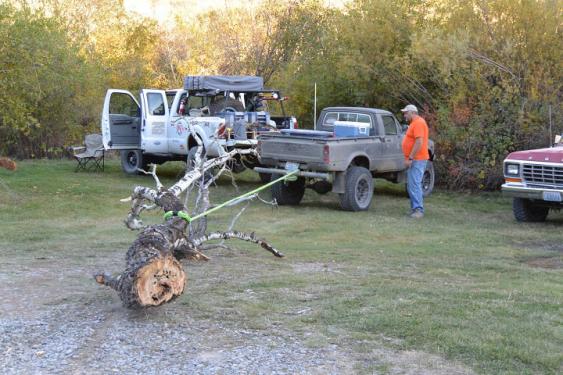 We camped on Agency Creek in Tendoy, Idaho, for night 4. When the temperature started to drop and we were looking low on firewood, Rocky Dorame simply went and found a dead tree to harvest. Doesn’t everyone carry a chainsaw on a trip like this?!