"When Lacey first told me the tires you were sending I looked them up online and was a bit skeptical. I have been running (another brand’s) all-terrains for a few years now and I was looking to get something a bit more aggressive with a more open tread pattern and softer rubber. My old tires were hard and I was constantly getting harassed by my fellow rock rollers that I spun on everything.

I had called ahead to Big-O Tires for them to mount them, knowing my new tires were coming in at the last minute. When I picked them up at Fed Ex in Rancho I was happy to see the tread pattern was a bit more aggressive than my last tires. I like that the pattern on the Grabber AT2 was more open and didn’t have the little angle at the edge of the tread like my old tires, which should be better designed for the mud and clean out easier. Within an hour of me dropping them off they were mounted and balanced and I was picking them up to go home and mount them on my Jeep. I packed the last few items in my Jeep and headed down the road on my way to Gate Keeper past the Spillway on the Rubicon Trail, with Buck Island my final destination for the night. I didn’t check the pressure in the tires, when I left Big-O, maybe I should have but they felt good and ran with it. Turns out Big-O had put 35psi in them. As I hit the pavement I couldn’t believe how well they handled. They handled better than my full size ¾ ton 4X4, 7.3 liter diesel on E rated all-terrains. I was amazed. I got to the trail head, at Loon lake spillway, about 7pm. Once I was off the pavement I looked to see where the tread was still clean to see how they were wearing and noticed a clean black ring on the outer edge of the tread (figured when I got to staging in Tahoma and was off the trail on Sunday, I would only air back up to 30psi to see if I got better tread wear on the asphalt), I aired down from 30 to 15psi and was on my way. I made my way through Gate Keeper with no issues and down through the bowl. Going up the other side I was however disappointed at the difficulty I had getting up the steep polished section on the upper end of the other side of the bowl. It seemed that when the tires were a little wet or had a bit of mud I had more difficulties with getting traction on the polished surfaces. That being said, I understand that to be expected. I just thought it wouldn’t be a little better after the tires spun a bit and the majority of the mud had been knocked off. I poled a JK Jeep later with some new mud-terrains regarding that one spot and, depending on how honest he was, and he said he walked right up that spot. Obviously a JK has a longer wheelbase and that very well may have played a major factor at that location extending the front tires beyond the polished area. I had a couple more incidents like this where my traction was reduced but really only on the polished surfaces. Despite the moisture up Cadillac, I had little or no slippage and walked out without incident on my AT2s. I do recall having significantly more difficulty last year, on Cadillac, with my old tires. I aired back up to only 30psi and headed out to HWY 89 and the rest of the way back to Rescue. The Jeep handled well with only 30psi. I did another tread wear check on my dirt road and there was only a sliver of clean tread around the edges; 30psi seems to be the right pressure for my rig.

The next weekend was Jeep Jamboree (run the week after Jeeper’s Jamboree) We went up on Thursday evening to camp out at the spillway and fall in line with participants early Friday morning. It’s hard to say but I think the additional flex in the sidewalls going from 35 psi down to 30 psi made the Jeep float a bit more on Ice House Road, but still handled very well. In an effort to try and dial in the appropriate tire pressure for the trail, this time I dropped the tires to 12psi. Not knowing how soft the sidewalls would be, I didn’t want to go too low. Having 15psi gave very little flex so I felt 12psi should still be okay. ‘Turns out 12 psi was just fine and could have probably gone down to 10 psi without any problem. Dropping 3 more psi actually gave the tire a noticeable difference in flex but not so much that I ran the risk of breaking the bead. The tires performed quite well at 12psi. I still spun a bit on the steep polished slope where I had a bit of trouble the previous weekend during the Jeeper’s Jamboree, but not as bad. I popped up it pretty quickly—same goes with the newer steep spot just past the bowl. I spun a bit and then popped right up. With my last tires, I had some difficulties at several of the difficult areas just past Buck Island. But this time I walked right up them without any issue. This trip, I had a group that decided to take a more difficult route into camp and therefore had a bit of a chance to play a bit and take a few pics of the Grabber AT2s in the mud after helping the participants through. You can see from the pics, at low speed and low pressure the tires did well to eject the Sierra black mud. Cadillac, again, was not an issue on the way out this time, either. While rock rolling this year, I noticed several spots where we had the vast majority of participants struggle on, but the Grabber AT2s all-terrains went right through without a problem. I had a minor issue at V-Rock where I got off line and had to back up a couple feet to move over a few inches, but other than that Cadillac was a breeze. The miles and miles of Forest service road were no big deal, just long and bumpy. This is where a coil suspension would be nice…but that’s a whole ‘nother story.

As a multi-use tire the Grabber AT2s did very well. I can only imagine a tire manufacturer trying to develop a tire that makes everyone happy. If I had a rig that never drove on the highway, those Red Letter Grabbers or another more aggressive tread would be awesome. But based on how I use my Jeep, I think the Grabber AT2s were a better way to go. I get to the trails and fun spots by driving, not trailering. I am anxious to try these new tires in the snow. My house is in Pollock Pines and we sometimes get our fair share of the white stuff." 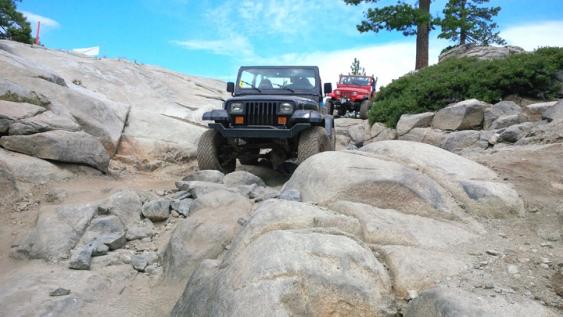 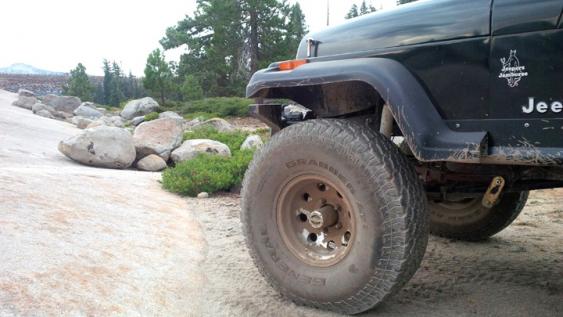 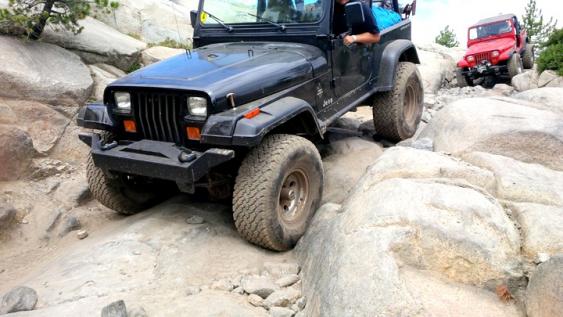 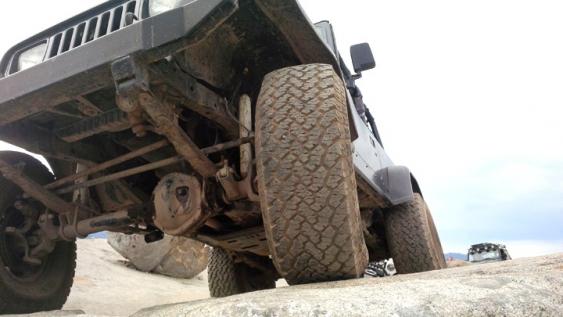 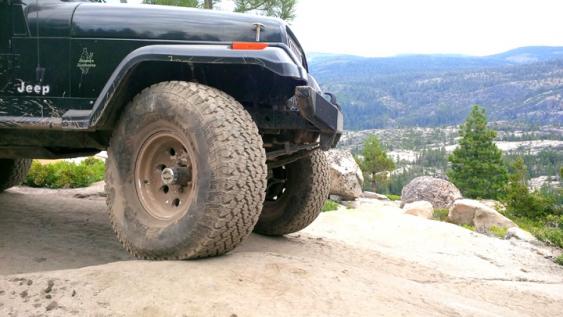 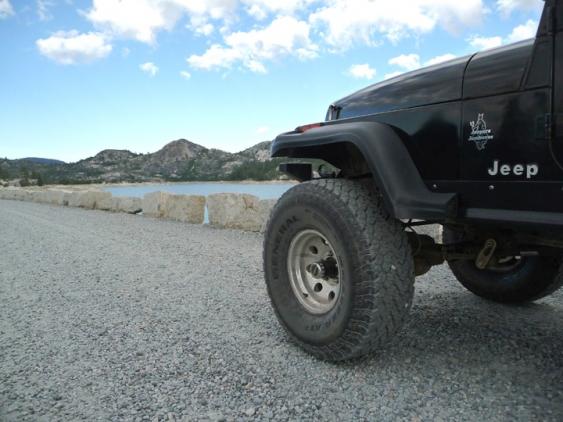 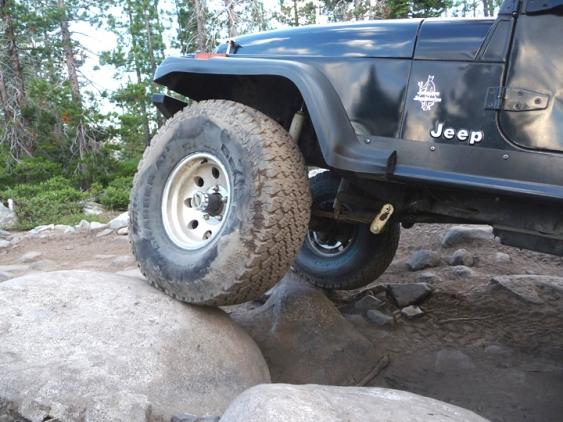 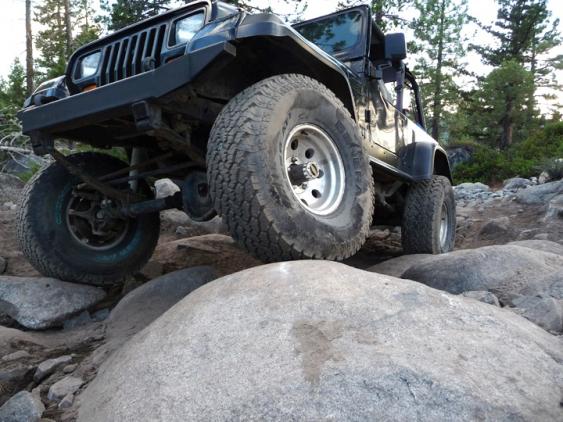 First. Second, and Third for General Tire at the Wild West Motorsports Park